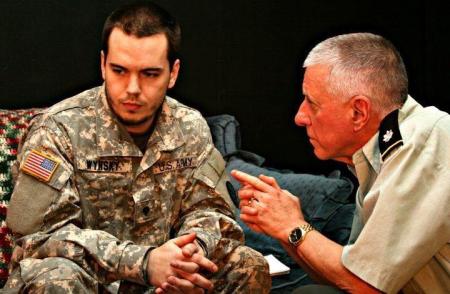 “We have always known how to send our young to war, known to welcome them back with parades, garlands, and trumpets. We have never known how to bring home their hearts and souls.” – DC Fidler 2011

Boogieban is the story of a young soldier returning from Afghanistan with nightmares. The story has strong elements about war … but is not a play of war. It is a play of the journey that two men from two different military generations take together, a journey they take to that mystic place where hearts alter. I hope audiences find that mystic change as they too share in this journey.

Versions of Boogieban
▪ The original draft of the play consisted of 5 scenes running about 90 minutes.

▪ The teaching format consisted of 5 excerpts from the first 3 of 5 scenes. Following each excerpt audience members are invited to interview the two characters: Military Psychiatrist Lieutenant Lawrence Caplan and his patient Specialist Jason Wynsky as they remain in character. This teaching event lasted from 60 to 90 minutes.

▪ The full play with teaching format consisted of pausing after the first two scenes to allow audience members to interview the two characters: Military Psychiatrist Lieutenant Lawrence Caplan and his patient Specialist Jason Wynsky as they remain in character. After a brief intermission the final three scenes were presented without interruption. Total time was two hours.

Group for the Advancement of Psychiatry (GAP): The Boogieban Tour presented the full rough draft of the play with teaching format at the GAP meeting in White Plains, NY at 5 pm on Friday, November 15th, 2013. This was the final performance for the 19-month tour, and as happened with all productions, we received an enthusiastic standing ovation.

Don and Travis presented a one-night-only, sold-out performance of Boogieban at on Monday, November 11th, 2013.

National Football League (NFL) Program for Substances of Abuse: We presented the full play Boogieban with teaching formatting as a Special Session at the NFL Program for Substances of Abuse annual program in New York City at the Marriott Marquis on Friday, October 11th, 2013. Once again audience members asked wonderful questions and we received numerous invitations to present at future programs. William Brigham, administrator of the program, informed us that we received: “Unanimous outstanding ratings from your audience.” Thank you Bill for this unique invitation to perform.
Eastern Virginia Medical School in Norfolk: We presented the teaching format of Boogieban as a Psychiatry Grand Rounds in Norfolk on Wednesday May 8th, 2013. Audience questions were wonderful. Thank you Dr. Justin Petri for your enthusiastic invitation. We had a great time.

University of California at San Diego: We presented the teaching format of Boogieban at USC Psychiatry Grand Rounds at 9:30 am on Thursday, March 28th, 2013 and the full play version on the evening of Thursday, March 28th, 2013 at 7 pm in the Leibow Auditorium at UC-SD. We had always hoped to do a full presentation somewhere, sometime and have the audience members moved enough that immediately upon completing the show, the audience members would still be sitting with the powerful ending and not be able to applaud. This happened at UC-SD. Moments later, when we re-emerged, we received a standing ovation. Thank you! – And thank you doctors Lewis Judd, Sid Zisook, and Paul Rashid for your persistently encouraging invitation.

University of Southern California: We presented the teaching format of Boogieban as a Special Psychiatry Grand Rounds in Los Angeles from noon to 2 pm on Tuesday, March 26th, 2013. Audience members asked superb questions. Thank you Dr. David Baron for arranging for us to perform and tour the USC School of Cinema.

Northwestern University in Chicago: Travis and I presented the teaching format version of Boogieban for a 90-minute, Special Invited Veneratio Orator Psychiatry Grand Rounds at Northwestern University in Chicago. Once per year the residents vote on selecting a speaker and grand rounds of their choice and we were fortunate to be selected for this wonderful honor. The audience members asked wonderfully insightful and penetrating questions as we stopped five times after each of the five excerpts to allow audience members to interview us in total character, freezing our behaviors and emotions to exist at those specific moments in time of the excerpts. After the presentation, we had lunch with the residents to allow them to ask additional questions and share their own experiences. Travis and I agreed: “It doesn’t get any better than the delightful experience at Northwestern.” Thank you Dr. Mark Chapman and fellow residents for this special invitation.

University of California at Davis in Sacramento: We presented the teaching format version of Boogieban for the Department Psychiatry Grand Rounds on September 12th, 2012. Excellent reception and questions. Don enjoyed that his brother and brother’s family from Sacramento were able to attend. Don’s nephew Michael said at one point he almost jumped up on the stage to rescue Don from Travis. It was wonderful that Michael could immerse himself into our play so intensely. Thank you Dr. Don Hilty for extending an invitation to perform.

Brigham and Women’s Hospital – Harvard University in Boston: Travis and DC reported a very successful performance of the teaching format of Boogieban for the Brigham and Women’s Hospital and Harvard Longwood Psychiatry Grand Rounds at Harvard Medical School Department of Psychiatry on April 12, 2012. The performance was presented as an invited lecture for the “Jonathan F. Borus Lecture in Psychiatric Education.” DC and Travis performed excerpts from the first three of five scenes, pausing to allow the audience of psychiatrists and other mental health professionals and students to question them in character. The audience was highly interactive and asked superbly focused, piercing questions. Written comments from the faculty members included: “terrific–creative,” “wholly original,” “fascinating,” and “extraordinarily well received.” Thank you Dr. Arthur Barsky and the Lectures Committee at Brigham & Women’s Hospital for the invitation to present in honor of my good friend Jonathan Borus.

One audience comment that was a highlight for Travis was from a faculty member who commented that he had recently attended the Broadway Production of Death of a Salesman with Phillip Seymour Hoffman and commented that Travis’ performance far outdid Mr. Hoffman’s performance.

Alutiiq Festival on Kodiak Island, Alaska: March 2012, Travis and DC had a highly successful run of Iin Akhiok, Alaska, which included a second encore performance. They also performed the play Ahulaq which is about Alaskan villages in 1988. For Ahulaq Travis and Don were joined by Kodiak actors: Eric Wood and Melinda Amodo for the four person show. As village elder Luba Eluska said, “I have never seen the young people so attentive for so long as they were for both of these shows.” Thank you Linda Amodo for inviting the plays to be performed to warm hearts amidst an amazing snow blizzard. Twice! It was exciting for this historical first of bringing two serious adult plays. The villages have always been full of children plays, pageants, and great story telling, dancing and music, but this type of theatre was a first. Both plays were great hits and the villagers want more!

West Virginia University, Morgantown, WV: DC Fidler, Travis Teffner, and RJ Casey presented the teaching format of Boogieban as part of their presentation: “Using Theatre for Teaching Psychotherapy Techniques and Professional Issues,” for Psychiatry Grand Rounds in the Department of Behavioral Medicine and Psychiatry at West Virginia University in February 2012. Thank you WVU residents and faculty members for playing with us in the sandbox as we collaborated to develop a unique teaching format. It has carried us far.

Other Company Performances of the rough draft version

None-Too-Fragile Theatre in Akron, Ohio premiered the official revised two-actor version of Boogieban on Friday, November 16 through December 8, 2018 and will tour the play in Chicago in August 2019 and in New York City in September 2019.